The story benhind the photograph... 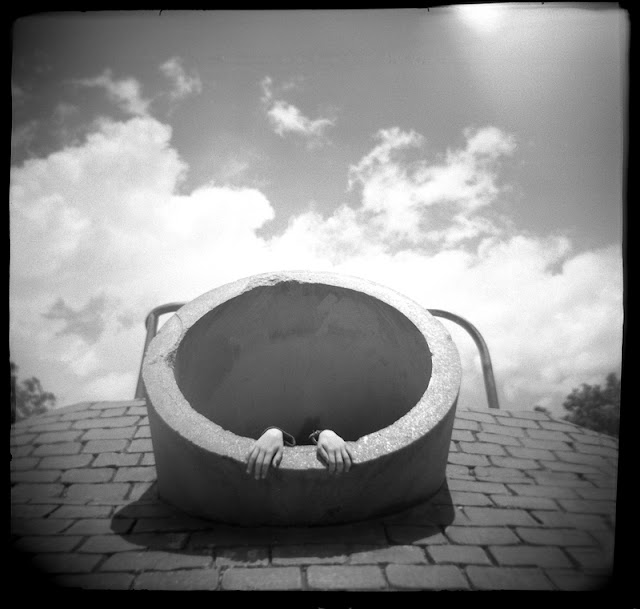 I have been thinking about my son a lot lately, who will be turning 18 soon,  so I thought I'd post this photograph that I did a few years ago on a summer visit; what follows is the story behind the photograph..

It was the early part of  the summer of 2006, my son had just come for a visit and we were headed to my wife's family reunion.  It was held that year an old park in tiny town in the south western corner of the Salt Lake Valley called Copperton, and like I do most of the time I brought a camera or two with me, in hopes of making a photograph or two.  Like most parks this one had a playground, that had a mix of old and new things for the kids to play on, but the one that caught my eye the most was unlike anything I'd ever seen before.  Imagine if you will a concrete mound, that had a slide on one side, a means to climb and walk up on another, a third side where you could climb up and a fourth side that was covered in brick and had a concrete tube sticking out of it, that resembled a cannon.  I think there were tubes that you can't see in the photograph that ran perpendicular to this one also.  As I came and went that day through the park and through this playground I kept thinking about the tube, so near the end of the reunion I stopped and made a photograph of it.  The first one was just of the tube as it was, but as clicked through advancing the roll of film on my Holga, I felt like it needed more, so I asked my then 12 year old son to come over and climb in the tube and put his hand out as if he were holding on to the outside of it.
Fast forward to the end of that summer and I am attending the Maine Photographic Workshops, something I had been wanting to attend for a very long time and was extremely fortunate to do so on a scholarship.  I had selected to attend a workshop called, "In Search Of the Personal", taught by a great photographer and educator John Goodman, from Boston.
Like most photography workshops, the first day involved showing our photographs to the instructor and the class, I had a few dozen photographs in two portfolio books.  I don't really remember all that John said about my photographs that day, that is except for what he said about this one.
As he pulled this photograph from the portfolio, I told him about how the photograph had come to be and he says to me, "This photograph is about your relationship with your son. Isn't it." As he finished his thought I instantly felt as if I had been hit with a one ton wrecking ball, because was he right, and I had never thought about it in the months since I had made the photograph.
When I got back from that week in Maine, I made another print and sent it to my son with a letter explaining the photograph to him and what I had hoped would come with our relationship.  I know he got the photograph but I don't know if he still has or even remembers me sending it to him nearly six years ago.  I hope he does of course, and if he doesn't I want him to know that I am still holding and that I love him.
Posted by Brian L. Schiele at 9:20 PM 3 comments: