It's been a while since I have posted something to my blogsite, 738 days if you are wondering,  but I have been making some Holga photographs, it's just a little easier to do some with my phone and post them to my Instagram account @harleys_and_holgas_forever or on Flickr, where I go by "Red Holga Man" a nickname given to me after attending the Maine Photographic Workshops..

I have used both my regular Holga and my 6x12 PanHolga, but have had mixed results over the past while, so I thought I'd post a few of the best photographs I have made recently..

This first one is from a vintage motorcycle show, as I recall, these two guys were wondering how the builder had routed and configured the front brake.

This is from the same bike show, you can even see this vintage Harley in the background of this first photograph. I used my square Holga and did a "Holgarama" with this one, where I made an exposure of the first half of the bike, then advanced the frame "17 clicks" and panned to the right for the second exposure. 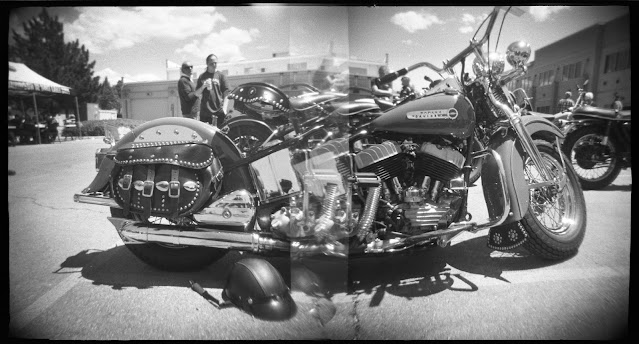 This next one is also from my 6x12 PanHolga, it's my wife on her bike, riding along the Bonneville Salt Flats.

This last one is from a ride I participated in earlier in the summer, at the Brian Head Ski Resort, that I did with my 6x12 PanHolga as well..

That's all for now, I hope to have more photographs before the end of 2022 and will post them as soon as I can.

Thanks for taking a look!

Posted by Brian L. Schiele at 3:29 PM No comments: