In 2007 I wrote an article on how to paint your Holga, that was published in Light Leaks magazine, which I put on my original website, so I thought I'd put it here too.

I used to think that black was a great color for a camera. Every camera I have ever owned has been black, but deep down I have always wanted a red camera. That’s when I looked at one of my many Holgas with a sly grin and knew that my wish for a red camera would come true.

The things you’ll need to paint your Holga include: 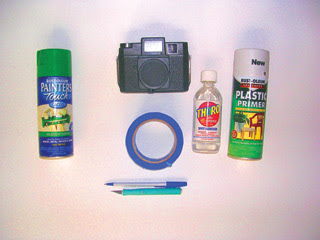 If your Holga is an old favorite it probably has a lot of duct tape residue, which I would suggest cleaning up before you begin. I have found that “Thoro” works well and doesn’t harm the plastic. If your Holga is brand new, cleaning it isn’t necessary, although you should remove the two stickers that are usually on the bottom of a new Holga.

I would recommend that you remove the metal clips that keep the back on, by using a fingernail to pop the smaller clip and slide the clip up.

Taping your Holga is probably the most tedious, but important step. A good tape job will mean the difference between a good paint job and a sloppy one. Typically, I tape the upper portion of the Holga, to include the lens barrel, as well as the aperture indicator (the sun or overcast icons), the tripod hole (if you have an “N” model), and the film counter window. Remember that the taped parts of the Holga will be black. Pay close attention to the viewfinder, especially when taping the back side. I have found that layering it helps; wrap the tape around the widow making sure that it is sealed well.

Once the rear part of the viewfinder is covered well, cover the rest of the camera well enough so that paint is unable to bleed through. 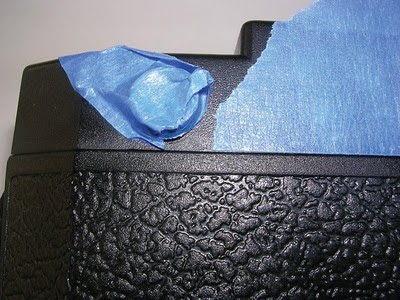 For the film counter window I take a strip of masking tape and use it to trace the outline of the window, if you trace it enough the outlining area should come off easily. 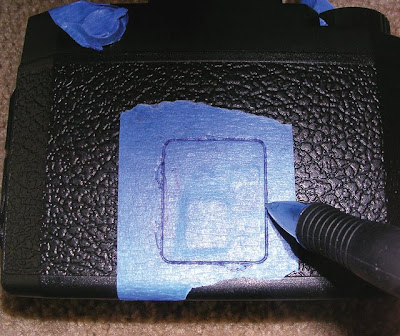 If you want the Holga name plate to show on the front you can use the same technique to tape and then cut some tape away from the sides. Brand new Holgas will likely have the nameplate covered in a clear plastic tape, so this isn’t necessary. For the winding knob, take a stip of tape and place it along the bottom of the knob, feed it along the knob and advance the knob while feeding it along the bottom. Fold in the remaining tape so that it covers the top of the knob. If you want to paint the top of the knob, make sure the tape is on tight enough so that paint doesn’t leak down the sides. I would suggest trimming any excess tape that is above the rewind knob, by doing so it will ensure a better covering with the paint. You can paint the entire knob, but I have found that the ridges along the edge are difficult to cover with both the primer and paint. 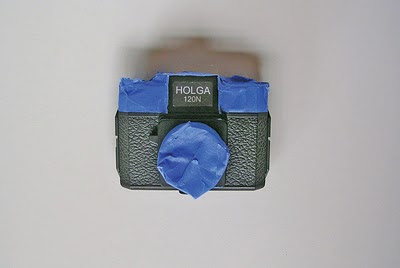 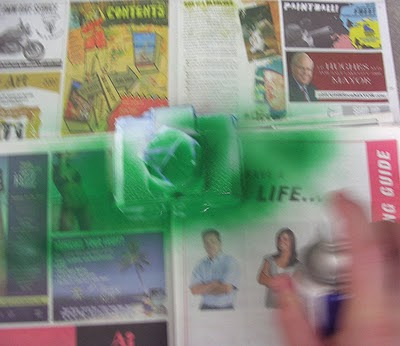 By this point your Holga should be covered with tape and is now ready to be painted with primer. Beyond following the instructions of the primer, I would suggest you allow it to dry at least 24 hours before you apply any paint. When your Holga is primed and dry, you can apply the paint. Again, I would suggest following the instructions per the manufacturer. My only suggestion beyond the manufacturers’ instructions would be to do a third coat if your Holga isn’t completely coated. Once the tape is dried completely you can take easily remove the tape by carefully peeling away the layers, let it dry for a couple of days before use.

Now that you have a Holga that has a bit more personality than it did before I am sure your photographs will too! 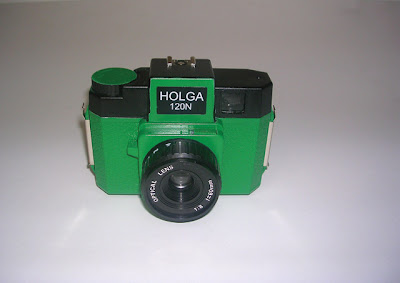 The following detail pictures didn't make the final article, but I thought they'd be useful. 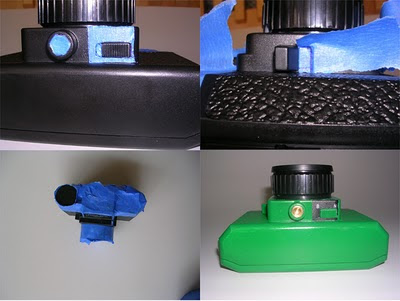